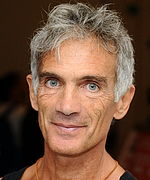 Maurizio “Manolo” Zanolla was born in Feltre, Italy on February 16th 1958. He is a sport climber, alpinist and mountain guide. One of the pioneers of Italian sport climbing, Manolo is also one of the most prominent ambassadors and icons of this sport. He became known as “The Magician” due to his ability to almost float up difficult slab climbs. He was the first Italian to climb 8b back in 1986, when he successfully redpointed Ultimo Movimento at Togota (Pale di San Martino, Italy). He’s also done many free solo ascents, most notably Masala Dosa (8a) at Togota in 1992. He has always led a simple, reserved and quiet life. He actively avoided competition, as this was not where he gained his satisfaction. He just tried to climb harder and harder routes whilst keeping the joy and the freedom to enjoy his pure style of life. At the age of 56 he shows no signs of stopping, still being able to climb at the highest level and push the magical grade of 9a. He is a true example of longevity in sport.